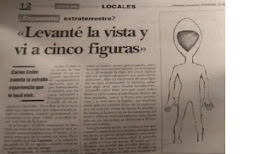 On the afternoon of August 25 1999 (between 1600 and 1700 hours approximately), Carlos Colón, a resident of the locality of Trenque Lauquen of the Province of Buenos Aires was driving his pickup truck along Route 5. Around the kilometer 465 mark and some 30 kilometers distant from the town of Pehuenches, his truck’s radio began picking up interference which the driver found startling. Colón was on his way to answer a call from a local farmer whose tractor needed service. Getting out of the vehicle, he lifted the hood, suspecting an alternator issue. Concentrating on the task, he saw something move and approach the truck at high speed from the depths of the countryside. He described it as “a screen with shadows inside it,” semi-circular in shape. The object stopped only a few meters away from him.

“They were hugging each other like actors about to take a bow at the end of a play.” The entities corresponded to the Type 3 classification (Tall), as they stood approximately 2.50 meters. They never left the screen, which the witness described as being luminous like a cinema screen. They exchanged glances among themselves and at times looked at the witness.

The screen began to get smaller until it formed a dark grey cone, flying vertically up to the clouds covering the sky and which were rather low, making it impossible for Colón to see where they went. Upon turning around, he realized his pickup truck was now in the field and on the opposite side of the barbed wire. This caused him to feel confused, as he did not recall having crossed to the other side. This ‘missing time’ period and the notable exhaustion he felt after the event were interpreted as a health condition (although one could speculate that these are the same physical effects that follow the oft-mentioned teleportations along Route 5).

Colón drove straight to the hospital, had his pressure checked and after several tests was informed that he was in a heightened state of fear. He told his wife of the event, shared the experience later on with a friend at a bar, a fellow parishioner heard the story and interrupted the conversation, adding that a truck driver and his companion had seen a metallic object traveling over the local treetops at around the same time in the same location (at no time did Carlos see an object; only the screen with entities inside it).

At first, the truckers believed it was a truck carrying a silo or large pipes, but later ascertained that the police checkpoint had not recorded the arrival or departure of such a vehicle. And since no other roads cross the area, Carlos said “they saw I wasn’t as crazy as I sounded.”

It is well known that Carlos Colón acquired clairvoyance, photographic memory and precognition following this event…skills he would lose over the years.