Argentina: A Landmark UFO Case from 1972 is Disclosed 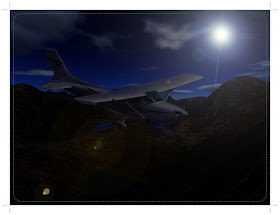 Marcos Barraza of Nuestro Pasado Extraterrestre shares with us this document from 1972 - the first official report by Argentina's "Gendarmería Nacional" concerning a UFO incident.

He writes the following in his blog: "It was on January 2, 2010, during the inauguration of the Nuevo Museo del OVNI (the New UFO Museum) in the city of Victoria that the research staff of VISION OVNI startled the authorities and the public with what is the FIRST OFFICIAL UFO DOCUMENT from Argentina's Gendarmería Nacional. It is important to examine this document with care. It includes the information, names and surnames, places and details of an encounter between a Gendarmería Aircraft and a UFO, but [particular importance must be given] to Page 4, which explains: "This form... and has the purpose of informing the senior ranks of the Institution for the preparation anf an orderly and updated file of phenomena of this nature (!!!)." Today, thanks to the VISION OVNI team, we are sharing with you this first document, corresponding to the Gendarmeria Argentina. Stay tuned for more!"

We would like to extend our thanks to Marcos Barraza for making us aware of this development on his Facebook page and to SYLVIA AND ANDREA PEREZ SIMONDINI for their tireless work toward ending UFO secrecy in Argentina.

Without further ado, here is the translation of this landmark 1972 sighting:

Supreme Army Command
Report on Unidentified Flying Objects
Information pursuant to the event:
Time of the sighting: 02 November 1972, 20:30 hours
2. Sighting location: Province of Buenos Aires - Campo de Mayo -- in flight.
3. Atmospheric conditions:
a) Skies: Clear and starry - Lunar altitude: Moon not visible
b) Atmosphere: diaphanous
c) Adjacent soil: Low and damp.
d) Soil under the observer: Observers were in flight.
e) Visibility: Normal nocturnal flight conditions.
4. Circumstances surrounding the phenomenon.
a) Activity being conducted before the phenomenon was observed: Nocturnal flying instruction since 19:20 hours.
b) Activity carried out at the time the sighting took place: Nocturnal landing and takeoff instruction from header 36 of the Campo de Mayo runway.
c) Persons accompanying observer at the time of the sighting: 1st Ensign D. Alejandro Urs Vogt, Gendarmerie pilot, reviewing the Flight Squadron, and Mr. Jorge Torrecilla, Gunnery Instructor at the Gendarmerie and of the Joint Senior Staff for "Police Training", also a civilian pilot.
d) Location with regard to the observer and the phenomenon.
1. Observer's geographic location: Over Campo de Mayo.
2. Relative position of the place the phenomenon occurred with regard to the observer and the cardinal points: 320 degrees with regard to Campo de Mayo (runway 36-18).
3. Representation of the initial position of the phenomenon observed in the panoramic display: See drawing attached in Exhibit 1.
4. Indicate in the display the phenomenon's trajectory using dotted lines, marking its progression with increasing numbers: See drawing in Exhibit 1.
Page 2
Indicate the distance from the observer: 35 to 40 approximately.
a) Angular altitude of the phenomenon with regard to the horizon, from 0 to 90 degrees: 25 degrees, approximately.
b) Angle of the vertical plane running through the observer and the phenomenon in an N-S direction: 320 degrees.

General description of the event:
a) Total observation time for the phenomenon: 40 minutes, approximately.
b)Total time it remained in the each position occupied: The object remained static, accompanying the movement of the Gendarmeria Nacional aircraft, registration GN 7E during a 10 to 12 minute period.
c) Physical shape and characteristics of the phenomenon or object witnessed: See drawing and description in Exhibit II.
d) Manner in which the sighting occurred: Plain sight and through the portholes and windshield of the single-engine Cessna 182 aircraft.
e) Description of the phenomenon. See Exhibit II, Part 2.
f) Attitude of the complainant with regard to the sighting of the phenomenon: The Flight Instructor of the pertinent Gendarmeria Nacional squadron, 2nd Commander D. Ramon Hector Flores, decided to head toward the phenomenon in order to observe it, requesting authorization to do so from the Campo de Mayo control tower.
6. Traces, evidence or clues that may have been left behind or taken.
a) Disturbances experienced (engine, radio, battery, etc.): None.
b) Marks, signs, or damage that may have been left behind in the vicinity (over homes, etc.): None.
c) Traces or clues arising from the event which may have been collected (material, etc.): None.
d) Photographs, films: None taken due to a lack of equipment.

2. General Information (psychological profile)
a) Has the informant witnessed objects or events of an unknown or hard to explain nature? (evil lights, wolfman, ghosts, etc.): Never.
b) Reading material, movies, magazines and television that he customarily reads or views: Reading material related to aeronautical subjects or current events.
c) Hobbies and specialties: Recreational shooting and sports.
d) What does he understand "the beyond" to mean?: The informant believes that he is unprepared to define the possibility of life on other worlds. Does not believe in spiritism and extra-sensory perception.
e) What was his opinion to this day of those who claimed to have had, or participated in, UFO experiences?: In most cases, they were stories from people who had truly seen something, not dismissing the possibility that psychological influences and the lack of technical knowledge may have lead people to believe they had witnessed alien spacecraft.
f) What does he think of his recent experience?: Personally, he believes that it has been interesting, yet unable to speak as to the nature of the phenomenon. He therefore restricted himself to providing an objective report of what was seen.
g) What was the reaction of his escorts?: The reaction of the informant and his escorts was one of complete calm, proven by the decision to try and ascertain the nature of the phenomenon by moving in for closer inspection.
h) Was he smoking, or were any of his companions doing so?: He does not smoke and his escorts did not smoke throughout the proceedings.

REMARKS: This form must be filled out by the immediate superior of anyone who attests to the sighting of an Unidentified Flying Object and has the purpose of informing the senior ranks of the Institution for the preparation anf an orderly and updated file of phenomena of this nature, observed by personnel of its branch. This is an authentic copy of the original in four pages.

5. General Description of the Event
c. Physical Shape and Characteristics of the Phenomenon or Object Observed:
At the time that the sighting occurred, the object looked like an enormous half-moon with an irregular bottom edge, with a small light with bluish edges apparently hanging from this bottom edge. It subsequently disappeared after Campo de Mayo tower gave permission for the phenomenon to be examined more closely. The crew ascended toward it.
At a distance of approximately 12 kilometers, it was possible to see the object more clearly. It had a nearly spherical shape and well-defined shape at the time (see drawing in Exhibit II, upper). The bluish light vanished and the object's reddish hue became dim (a shade resembling borravino). It maintained this shape and color until the observers came within 300 meters approximately. At this time, a left turn maneuver was executed to avoid a collision at 1600 meters to the southeast of the city of Campana, Province of Buenos Aires.

e. Description of the Phenomenon:
Proceeding with the description initiated in the preceding point, the observers added that with the intention of improving their sighting, they turned off the aircraft's instrument and navigation lights (statutory external lights).

While making the left turn, it was possible to see that the object was approaching the aircraft, bringing about the need for this maneuver, until the object in question remained behind the aircraft's tail (stern). As the aforementioned maneuver was executed, two or three lights became visible. These were small, average-sized and of even size in the object's lower third (see drawing in Exhibit II, lower section).
The referenced turn was terminated with an approximate heading toward Campo de Mayo. At that moment, Mr. Jorge Torrecilla (civilian escort to the pilots), who was seated behind the pilot, noticed that the object was located 10 degrees to the left of the airplane's tail (stern), acquiring a more muted tone, maintaining its shape and distance with regard to the airplane.

The crew initiated a new left turn to try to see the object in more detail, but it lost itself from sight momentarily.

Once the maneuver was completed, and unable to see the vehicle, information was requested from the Control Tower to ascertain its presence. At that time, 1st Ensign D. Alejandro Urs Vogt noticed that the object was directly above the aircraft, prompting the crew to make a pronounced spiral dive down to an altitude of 600 meters. Two course changes were made at this altitude with 90 degree angles. In spite of this, the object remained constantly over the aircraft. All of this was reported to the Campo de Mayo Control Tower, which ordered the aircraft to return to base immediately, while it cleared other aircraft in flight from the area to enable a prompt landing.

The crew continued its straight line descent to Campo de Mayo, getting ready for final approach.

During this maneuver, the onlookers temporarily lost interest in the object. When they tried to locate it again, they were unable to do so. They asked the Control Tower for more information.

The tower reported that they had stopped seeing the referenced phenomenon. The crew then requested authorization to make a 360 degree turn to try to place the object once more, which was not feasible.

Upon returning to the base, they were welcomed by Army personnel for debriefing.
Throughout the proceedings, the crew kept permanently in contact with the control towers at Campo de Mayo and La Plata, respectively, advising them of their radio-electric location, altitude and other required information. The crew was also able to listen - over the radio - that an Aerolineas Argentinas airliner reported having the phenomenon in sight. Aside from all this, pilots from the Morón Air Base operating in neighboring areas were also made aware of the circumstance.