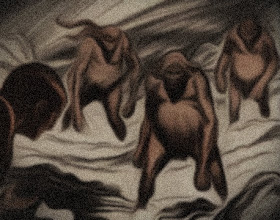 October 1971. The third Argentinean expedition to the Himalayas under the command of Lt. Col. Hector Cativa Tolosa had been split into three groups. Camp No.1 was in the lead and in mid-October found itself at an elevation of 6500 meters at temperatures of 30 to 40 degrees below zero.

On the 16th, as the expeditionaries returned to their campsite after having gone out to make repairs to a little bridge, they were in for a shock. Their tents had been destroyed by the primal rage of an unknown being. Cans containing foodstuffs had been torn open and emptied out; remnants of food were scattered on the snow.

A "strange animal" had left footsteps measuring 34 cm long x 18 cm wide. Judging from their depth, the creature must have been enormous, with a weight close to 300 kilograms.

The news was received at 0100 hours on October 19th in the city of San Juan (Argentina) through a radio link made by the Club Andino Mercedario. The report was subsequently substantiated by Mr. Salles, the director of Radio Mitre, and by Mr. Cagnelli, the news director, who connected to the ham radio network that followed the mountain climbers' exploits (La Razón newspaper, 10-19-1971).

On March 25th the previous year, Don Wihillans, leader of the British expedition, had seen the mysterious creature at 4500 meters through binoculars. "It resembled a strange human figure, resembling a large gorilla or abnormally large chimp." Its tracks were found in the snow the next day.