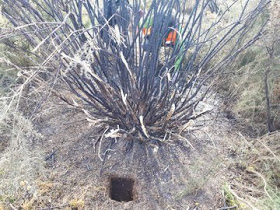 Geologists from the South American country denied that a fireball had set pastures on fire on the island of Chiloé.

A team of geologists from the National Geology and Mining Service of Chile (Sernageomin) analyzed the site where a meteorite allegedly fell on September 25 of this year, dismissing the possibility that a bolie (fireball) had caused several sources of fire.

The investigation was conducted from the Dalcahue area on the island of Chiloé in the southern region of the country. The seven spots with burned pastureland were evaluated. When preliminary results were presented on September 28, they revealed that no remains or evidence of a meteorite impact had been found.

Furthermore, Sernageomin envoys spoke with local residents, who stated that they had not seen the putative fireball and had not heard sounds linked to the impact of a foreign body.

While the presence of meteorite was initially discarded, geologists gathered soil samples to conduct a more thorough examination.