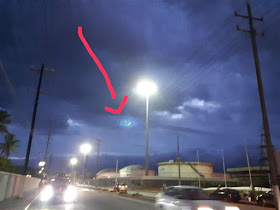 The alleged craft was saucer-shaped and surrounded by glittering lights, making it visible despite the pervasive cloudiness.
Photos were taken by the eyewitnesses own cellphone cameras.

Photos of an alleged UFO have circulated on social media as it flew over the facilities of the Francisco I. Maderio Refinery, property of PEMEX, in Ciudad Madero, Tamaulipas. 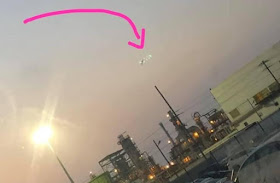 These events were made known by public transit operators as well as the employees of the state-owned company itself, who say such sightings are nothing new.

The putative craft was saucer-shaped and surrounded by glittering lights, which made it visible despite the pervasive cloudiness.

Photos were taken by the cellphone cameras of the eyewitnesses themselves, mainly public transit users and taxicab drivers, as well as vendors who do business in the morning in the Refinery area.

It was reported that the sighting took place at Access Gate 1 to the Ciudad Madero refining plant. Workers say this is not the first time they have witness such a thing. According to local media, the event took place between 6:50 and 7:00 a.m. this Saturday.

The existence of an urban legend in southern Tamaulipas should be noted, concerning the presence of an alien base in the waters of the Gulf of Mexico. According to believers, [these aliens] are in charge of safeguarding the region against hurricanes and tropical storms.