Astonishing Tales: A Voice from Beyond the Grave 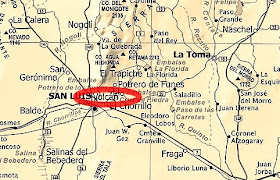 Astonishing Tales: A Voice from Beyond the Grave

Luis Burgos: Well, I think this case ranks up there with the top astonishing cases, because it was incredible and is still remarked upon to this very day. It was the source of many doubts and controversies, but the witness stands by what he saw and well, I was an indirect witness to what occurred. I had to visit the site in person to ascertain what he was saying, right?

"It all happened in the summer of 2001, a lousy time economically speaking for many in Argentina, but apparently not for FAO (Argentinean UFO Foundation) because we undertook three separate outings in three months. In February a trip to Victoria, in March a visit to El Volcán in San Luis, and in April we wound up in Sierra Ventana, Villa Ventana. An impressive outing that I don't even think we could duplicate nowadays, as the resources of the FAO members just aren't up to it.

"It turned out we were staying at an Alpine cottage in San Luis, a very lovely place, with a beautiful landscape up in the mountains. Spectacular weather too, and among those present was Fernando, who was our group's official photographer, who would take care of all the details for each outing. He took part in practically ninety per cent of all FAO outings and research trips.

"I recall one warm, pleasant morning in San Luis, when I felt the urge to go fishing at the Las Piedras Reservoir. Not far from El Volcán. A lovely reservoir. Well, I wanted to gather some earthworms to go fishing and indulge in the sport, since that evening we were setting up a skywatch. At a given time I remember my wife was preparing for lunch at around 10 a.m., chopping vegetables in the kitchen. Other members were still sleeping; some had gone out shopping...I also remember Fernando came running downstairs in a fright, shouting for me and my wife. I wasn't scared, but it startled me as to what could have happened, as an absolute sense of serenity dominated the place. He approached me as white as a sheet of paper and said: "No, no, you can't imagine what just happened to me!" We urged him to calm down and asked him to explain what had happened. He replied: "No, I went some thirty or forty meters away to take landscape shots of the trees and the mountains when I heard an odd voice, a guttural voice, otherworldly, very strange..."

"I exchanged glances with my wife and then asked Fernando, was it a ghost, did it appear? “No," he replied. "[the voice] went something like WAAAAHHHHHH..." or something like it, although it wasn't exactly the same. All I could think to do was wash my hands, as I'd been gathering earthworms, and tell him, well, let's go and have a look together, see what's going on. My wife stayed in the kitchen, mystified, and the two of us went up the hillside. "Now hold on, Fernando" I said, "could it have been the sound of a cow mooing or something?" "No, no no" He was convinced that it wasn't anything conventional or quotidian, or something that anyone could have shouted. It was a guttural voice. Something astonishing, from the netherworld.

"So we went up the hillside, getting pricked by thorns. All we could see was cow dung, proving that animals had been in the area. From that height, looking at the landscape, there was nothing unusual to be seen. So we came back down and discussed the situation with my wife, and there we were, between the credible and the incredible. [Fernando] was clearly still in shock, as twenty minutes had elapsed and he was still talking about it.

"According to his story, he had the camera in his hand and even as he came down, the heard the voice a second time - in other words, he didn't hear the sound just once. As he ran down the slope, camera in hand - and you can imagine, he could've tripped and fallen, broken the camera or suffered an injury - he said he was coming down the slope, running, agitated, he stopped because he heard the sound once more. And that's when he told himself that this wasn't an animal, wasn't a coincidence, it was something directed at him. He's still bewildered about it to this very day, and he brings it up at all our gatherings. Nobody believed poor Fernando. They even accused me of having played a prank on him, which was unthinkable. Others thought he must have been drunk or drugged, yet hearing a guttural sound at ten o'clock in the morning transcends all paranormal guidelines, I mean, had it been at night like in horror stories it would've been another thing entirely, like what happened in the haunted house in Punta Indio. He stood by his story. Later in the evening, Oscar Perco, a deceased member of FAO, said he saw a figure 'dressed in white' near the house, by the mountainside...well, he sweetened the situation, I'm not sure if he added or detracted from the credibility of Fernando's experience.

"This is a story, I believe, that will be remembered to the very last days of FAO. A matter that was never, ever, satisfactorily explained."