Colombia: Cundinamarca - A Region Known for UFOs and Abductions 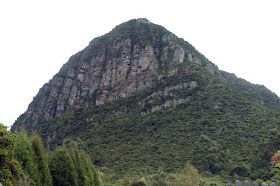 Colombia: Cundinamarca - A Region Known for UFOs and Abductions

The mountains of the municipality of Tabio, Cundinamarca, not only conceal treasures of our country's natural beauty, but also seem to have been a place visited by beings from other worlds, according to the areas inhabitants. On April 5, 1991, a peasant from this area vanished without a trace, only to be found in Pitalito, Huila, and claiming to have been abducted by extraterrestrials.

Luis Heberto Rodríguez was nearly 37 and informed local newspaper El Tiempo that he left home early on horseback toward his job when he was intercepted by a device with a powerful beam of light. "I was placed in a glass cabinet which contained three silver-suited beings who made me take my pants down and placed a glass on my back. Whenever the light turned on, I lost consciousness, and I could see a tunnel with many entrances, as if I was flying in a plane," according to the newspaper account.

In 2015 Blu Radio resurrected Rodríguez's story, saying that the man would wake up at night and tell his wife that he was seeing strange lights in the sky. His wife, as well as the locals, called him crazy and thought his story was the result of alcohol abuse. However, the radio station added that following his alleged abduction, Rodríguez - an uneducated peasant - spoke fluidly and proffered strange messages.

This is how newspaper El Tiempo presented the story in 1991: 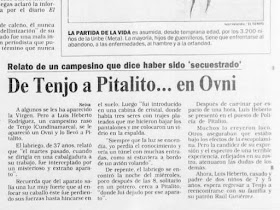 Both media have spoken with UFO expert William Chávez, who has studied the mountains between Tabio and Tenjo for several years, compiling information about the presence of aliens, and also has had his own experiences with them. Chávez claims having over 100 images, audios and videos documenting the presence of UFOs in that part of Cundinamarca.

The events share in common La Peña de Juaica, also known as the Gateway of the Gods, a mountainous region located amid the municipalities of Cundinamarca. According to newspaper El Espectador, on 24 September 1995, following a massive downpour, ufologist Chávez was in the area and had contact with beings of another world; an event witnessed by over a dozen people camped along the El Santuario trail.

Since the 1960s, Chavez told El Tiempo, residents of Juaica have been reporting the strange disappearances of its residents. He told the story of an 18-yearold man who vanished in 1960 and reappeared in 1980, and was still 18 years old. The passing of time had exerted no effect on him. "His mother had aged and was afflicted with cancer. He said he had returned to heal her, having been with some beings known as 'altaluz' (highlight) from the Huaica dimension."

Stories like this are told by residents and visitors who see lights and entities in La Peña, and for this reason it attracts curiosity-seekers. History Channel and other networks have been interested in stories regarding alleged alien contact on the mountain or the surrounding Cundinamarcan sierras.

Locals and visitors alike state light exhibiting abnormal behavior can be seen behind Peña de Juaica. They attribute them to unidentified flying objects or mystical beings from other times.

The lights of La Peña were identified by Muisca communities, who according to an article in El Tiempo from 1996, ascribed them to visits from the gods, calling them 'illuminated shacks' or believing they were dancing horses. Spaniards of the 16th century had also called the peak "the summit of dancing lights"

Local peasantry and knowledgeable people have different explanations for the event. Some say it is a special electromagnetic force, which has not been ascertained; others believe in the presence of UFOs in the place and some believe in hidden treasures, the so-called guacas, concealed in colonial times by local natives.