By Nelson Polanco and Luis Burgos

NP: Well, today we're going to discuss a fascinating case, one in which we were closely involved during an in-person investigation, and I believe it's one of the cases in which I myself, Luis and other members of FAO revisited an infinite number of times. An unending number of visits to the town of Gobernador Ugarte, approximately 350 kilometers distant from the city of La Plata. Well, today we'll touch upon what happened in Ugarte but from a different perspective, right? We will not speak of the humanoid aspect, but rather other things that took place, anomalies, and all the skywatches we've held at that location. Okay, Luis - I want to hear you speak about how the Ugarte situation began...

LB: Yes, as you know, the Ugarte event began in July of 2002, Nelson, in response to a call we received, but no sooner did we arrive than we started asking questions about the town's history with members of the Labaroní family, with Ricardo, specifically Ibocha, and the phenomenon taking place at La Esperanza had a background that extended three or four decades into the past, when three or four beings had been witnessed within the ranch - small creatures, appearing in the bedrooms. These weren't your typical bedroom invaders - they were entities who'd begun prowling the estate in the 1960s and 70s. This is the first proper humanoid case we've recorded at La Esperanza. Obviously, today we'll be discussing other matters, because there were a few humanoid cases in the area - your own, the one with Uncle Celestino that we've already discussed, the 'little kids' seen by Carolina one morning, heading over to the 'tranquera', the kangaroo-monkey-like creature, the orange-colored anthropomorphic one seen by Adriana one morning in the ranch - all of these cases reflect a humanoid anomaly. Today we'll go into how it all began.

LB: (continues) A ranch that already had its own folklore. We must remind our listeners, for example, that there's a pet cemetery on the premises, for cats, with tombstones with names on them. Animals that died under strange circumstances...

NP: For us that was something grisly, to be walking down the ranch's gardens and then come up against those tombstones...what's this? A graveyard in the middle of the ranch? Burying animals was commonplace at that time.

LB: Exactly. And we also found out that there was a tale from colonial times, from the time of Rosas...

LB: ...a place that was already mysterious in those days. We see a permanent paranormal case history. For example, remember the story that said that a woman had been buried alive at the order of a major landowner, supposedly on account of an adulterous situation, this that and the other. The landowner didn't even wait to hear the end of the story and ordered her buried alive, right there in the heart of the estate, a hundred something years ago. This would be the starting point for all the mysteries at Ugarte and vicinity, an area reaching up to Rio Salado, the town of Achupaya, Route 51,

LB: (continues) Nelson, were you aware that when the mutilations started in April 2002, among all the files from Western Buenos Aires bordering the Pampa, there was one quite close? We looked into a nearby case, in Punta Indio, Chascomús, to start our investigations, as this was a new phenomenon. We learned there had been a mutilation in Achupaya, an old ghost town, not far from Gobernador Ugarte. It occurred to us to phone the police station in Gobernador Ugarte. Miguel gave me the phone number, and I called them myself, speaking with the duty officer - Officer Reynoso - who is no longer at the barracks, and I asked him about the mutilations. He said: "Yes indeed, there was a case here, over by Achupaya, and I slyly asked him if there had been any UFO activity in the area, strange lights, something. This was at the start of July 2002. And he unequivocally said no. The only anomaly had been the mutilated cow in Achupaya, a case that appears in all records. And that's where it stood. We exchanged goodbyes and the time must have been six, six thirty in the evening.  I said, look, I'll give you my phone number, and I'll hold on to yours at the barracks, and if there should be any anomaly, please let me know. Nelson, around eleven, eleven thirty at night, the phone rang. "Ugarte" "What do you mean, Ugarte?" "Are you sure?" "Yes, this is Officer Reynoso speaking, you remember? We spoke this afternoon," "Yes of course" "Do you know what happened?"

LB: (continues) And my world tumbled right there. There hadn't been any UFOs, not even under the bedsheets, and now here was this officer calling me about a sighting in Ugarte four hours later. What kind of game was this?

NP: Luis Burgos triggered the phenomenon at the site.

LB: [The policeman said] "Only a few minutes ago they saw a UFO over the house in ruins. It was seen by a patrolman doing his rounds and there was a fellow recording it." It was the kind of story that made me want to take off right there in the middle of the night. So I told him, "please collect as much information as you can, I'll make an effort to get over there this week..." and I'm going insane. Either it was a prank that his superiors decided to pull on me, or it was true. But can you picture the coincidence? You call about a cattle mutilation, and up to then, not even a 'luz mala' (evil light) had been reported. 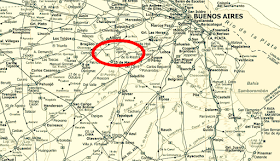 LB: Four hours later the man calls me and says that the medallion UFO - the medallion that's so popular on the web - and that's where we start talking about the history of Ugarte, the Labaroní family and our contact person. A few days later we made our first journey, and the weather was awful, I remember getting soaking wet with Daniel Lopez, and the second visit you came along, we went with Miguel to visit the family...

NP: That was my baptism in Ugarte.

LB: And we learned that there had also been a mutilation case - the case of the boy who turned over the keys of the property to the owner who was plowing when the famous "flying cow" incident occurred. We were fortunately able to see [the cow] when we arrived that night.

NP: Yes, we arrived late in Ugarte and went straight to La Esperanza, and when we got down - and I remember this vividly, because it was very grim, very dark, very little light pollution, and with flashlights they invited us to tour some twenty or thirty meters of property, and right there, at the door to the estate, was the carcass of the mutilated calf, with its head skinned.

LB: Head was completely denuded, and the rest of the body was mutilated but the hide remained. The cow had been dragged by a purple light, and the youngster from Santa Fe who witnessed it in the early morning hours, turned in the keys and ran off on account the fright he'd experienced, since he'd never seen a flying cow. That was the famous flying cow whose photo we later disseminated throughout the Internet.

LB: (continues) Now, how did all those coincidences come about? Because after the phone calls, the visits, we established a very close relationship relationship with the Labaroní family throughout all of 2002 and 2003 in Ugarte. And see how interesting it is: later on, no further mutilations occurred in Ugarte. There were mutilations in outlying communites, but in Ugarte proper, and in La Esperanza, we started having UFO cases but not mutilation incidents. Can you see how the situation inverted itself?

NP:...in other words, we could say the start of the Ugarte lights was that mutilation, which then led to other events, other anomalies which we ourselves were able to ascertain.

LB: We keep foremost in mind the relationship - the lights appeared, and the mutilation at the estate occurred. A very close relationship between events, the unknown luminous phenomenon and the animal mutilation.

NP: Of course. Then we have the other pattern I wanted to discuss with you, Burgos. The tight connection with popular folklore. You kicked off this episode of Invasores with the story of the native girl who was buried nearly alive at that place, and how paranormal incidents begin to intertwine with the UFO phenomenon with a very thin thread. One must be careful not to go overboard.

LB: Exactly. Look here, Nelson, what's interesting is the fact that after having conducted research on-site throughout 2002 and 2003, the Ugarte case, whenever we came back we brought with us another paranormal story. In other words, the local folklore was enmeshing itself with the UFO case history, the luminous phenomenon that appeared in July 2002.

NP: It was an effort, Luis, to make a distinction between the UFO phenomenon and the paranormal, and to separate the wheat from the chaff. Why? Because the people's instinct was to mix it all together - the light, the ghost...

NP: The work we did, which was magnificent in the aim of separating these elements, but also in explaining to the witness this is this, that is that, a sort of education, right? That was very positive.

LB: Well, Nelson, how about if for the next show we discuss the case histories exclusively - but not the case histories told to us by people, rather what we experienced ourselves? I think this was the place that we recorded the most anomalies. Do you agree?

NP: Exactly, yes Luis, of course. Well, we'll see you in the next chapter of Los Invasores.

[Translation and transcription(c) 2021 S. Corrales, Institute of Hispanic Ufology, with thanks to Luis Burgos and Nelson Pacheco]