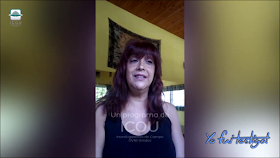 YO FUI TESTIGO (I Was a Witness)

An Eyewitness Report from Sandra Antimi

Hello, good afternoon, group - my name is Sandra Antimi from the city of La Plata, from Pau Central, and well, today I will be telling you about an incident...that...involved my father. Ehm, I particularly asked Luis [Burgos] if I could share his experience, so thank you, Luis and Nelson, and everyone for giving us this opportunity. Ehm, last year I shared an experience of my own in the city of Berisso during the first marathon held in the month of September, but now there were two reasons for which I wanted to share my dad's incident.

He had wanted to share his story for a long time with Luis, to tell him about it, and he would always say, "take me, take me" and it hasn't been so long that I have been a member of the group [ICOU], so, well, for reasons known to all, we couldn't hold a skywatch or anything...so he kept waiting and waiting, saying, "I want to tell that gentleman about what I saw, what happened to us. So, even during the February 14 skywatch that was going to take place in Ferrari, which was called off on account of the storm, he was desperate, wanting to go. And the second reason is that...well...I lost my dad. I lost him a month ago following the day of the storm. Something was unleashed, something unforeseen and well...I lost him days later, and it’s only been about a month.

So when Luis discussed making the video, I felt the urge, the need to tell his story, since he was unable to do so. This also took place in the city of Berisso at a beach called La Bagliardi. This was a long time ago, and he couldn't remember the year, saying it could have happened between 15 and 20 years ago...but not less than 15. And...he'd gone with three other men. That is to say, three men and himself. They'd gone camping, to spend the night there, and well, this was late. It was night, the lights were out, they were ready for bed, and one of the men had gone walking to the water's edge to check out the trammel nets, which could have been true, since they used fishing nets.

In fact, what I'm about to tell you know is something he never told me, and I never asked him at first. It was something he never gave much importance to, and years ago, all I thought I'd ever heard was that they saw a light appear, something powerful like a beam of light, from deep in the wilderness. That's what I recall hearing, or at least that's what I remember having heard. And it was last year, when the subject was brought up, having to do with things involving the group, I would share things with him spoken about in the group and he insisted again that he wanted to tell his story. So I'm very grateful that I asked him pointedly on that day: "Dad, what exactly was it you saw? Did you only see a beam of light coming from the wilderness?" and he replied "No. That wasn't all I saw."

So he told the story in detail. And he said: "Look, to give you a better idea, what I saw coming out of the wilderness flew over the treetops to the extent that it shook them." He made a gesture with his hands to show it was cylindrical, metallic - because I had a decoration there that was grey in color, metallized, hanging from the wall - and he said: "Look it had that color. Picture it as a giant flashlight, between 8 and 10 meters long." That is to say, it wasn't huge, just long; at least that's what I understood. Then he said: "And why a flashlight? Because it had the light issuing, projecting from its tip, which was the only light it had."

It went by at an impressive rate of speed. He didn't hear any noise. He said that all he felt, given its speed, was a 'whoosh' sensation, something like that, and he was able to see it perfectly, because he was inside the tent. Wanting to go out, he opened the flap, and no sooner did he step outside, he saw that thing coming out of the wilderness, and watched it fly by perfectly. Of the four men, he was the one who saw it best. The night sky turned to day, completely daylight, to the point that the two remaining men in the tent shouted: "What was that?!" They were frightened.

But the most remarkable thing was that he saw fire on it [on the object]. In other words, fire in the rear section. And he said that thing never ascended, never descended, and never veered off to any side. It flew past at an impressive rate of speed, illuminating everything and always in a straight line, until he saw it go away and lost it from sight in the river, so to speak.

In sum, they had a huge fright. The man at the water's edge only saw the night turn to day, and the object was flying so fast that he only saw it go by, ehm, and he did agree with my dad, after a while - because they were left speechless after the event. The man at the water's edge, who was the oldest of the group, was very scared, and he later agreed with my dad that they had seen the same thing. That is to say, the fire. But well, the one who saw everything perfectly was my dad. Ehm...it wasn't that he didn't believe in these things, just not giving to talking too much. He did speak, though, but not given to discussing these subjects. But he was a believer. He always said that we were not alone in the universe. He would say "there are weird things, weird things." But that was a very powerful experience he'd been through, and he never forgot about it. He always loved hunting - small game - fishing, so he always spent a considerable part of his life doing what he loved best. Out in the fields, on the river, in the sea...but that day he told me that he'd never, ever, had a similar experience.

And today I'm grateful that we had that conversation...I think I said it was last year. Because, well, I had the chance to hear him out, because up to then I always thought he'd only seen a beam of light shooting by at high speed, lighting everything up. That's it. And this was not the case. So he was never able to tell his story, but today I'm grateful for that conversation, and for being able to share it with all of you today.

So I hope you enjoyed it, and again, my thanks to Luis and Nelson for giving me the opportunity. So, the next time I'll be sharing my own experience in the city of Berisso. Thank you for hearing me out and my best regards.

[INEXPLICATA extends Ms. Antimi its deepest condolences on the passing of her father.]