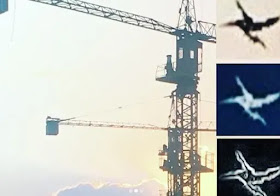 An odd object was recorded by chance on April 7 of this year on the grounds of Ciudad Tiuna, a development built within the perimeter of the Fort Tiuna Military Complex, as reported by journalist Héctor Escalante in his network.

According to the report, the image was obtained by Agustín Prado after 6 pm as he tried to photograph the sunset with his cellphone. "I was taking photos of the sunset, and later, upon reviewing the images to discard the bad ones, I found this strange object," Prado told Escalante.

Escalante added that Prado - a young man involved with the cryptocurrency market - said the object papers in a single one of the photos taken.

"Upon seeing the image, the first thing that comes to mind is a drone, but if so, why was its flight path not recorded in the other photos?" he wondered.

"Let us suppose," wrote Escalante in Ovnis en Venezuela, "that it was a stain on the camera lens, which happens often, but in this case, the figure is evident and well defined. Why is it not present in the other photographs, if the user never cleaned the lens during the process of photography? And if it was a bird, it can be seen not to be very close, and would have had to fly rather fast in order not to appear in the following photos."

[Translation © 2021 S. Corrales, IHU with thanks to Héctor Escalante and Guillermo Giménez]